Sometimes you can't stop but being in total awe. Through a friend I (or Caz and I) got the opportunity to go see Mike Tryphonos. This guy is so incredibly passionate about his bike, and bikes in general you can just feel it like some sort of force field when you get near him. When I first met Mike a long time ago he was very reserved about what he said and what he was working on. Understandably, I guess someone with his experience has heard a lot of BS and gotten a lot of negative criticism about his work.
Anyway, back on track. Yesterday we got the opportunity to go straight to the birthplace of Mike's bikes; His workshop. Not only was it immaculate, but Mike's enthusiasm also was glowing. You could tell from all his stories he was telling and the way he answered all the silly questions I had for him.
Oh, am I skipping a bit here... Let me fill you in; Mike builds (yes, builds, not assembles) his own Hub-centre steered motorbikes, the Tryphonos bikes. In fact, his history is, as of today, the 615, his final year project bike, then the 750TT, a bike that finished 11th in the IoMTT (out of some 80 starters!!), next an evolution of the 750TT, called the 907 which has been ran on the road for some 50,000 miles, and the 937TT, the most elaborate running prototype. You might have seen this in bike magazines etc. Mike's website is also mentioning the 998ZX prototype, but I'm quite glad that, after 2 years or so, Mike has scrapped this bike. He said that he's tried for two years to package it, and things just didn't work out. Don't worry though, Mike hasn't given up on the concept and that the future might (or might not) have something nice in reserve - if/when he does, it's his news to tell, not mine... 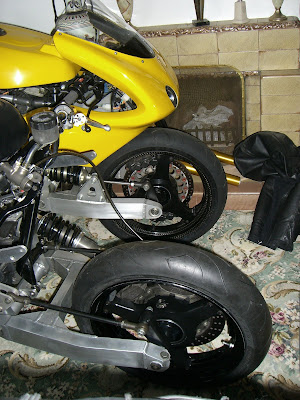 Either way, I had a great day, was awesome to see Mike's bikes, it was awesome to just chat bikes in general with Mike the rest of us. Thanks for having us over, Mike! :)
Top day out!
Posted by J at 10:26