It's been a manic 45 days or so. Not only did I have my first "proper" motorcycle accident, I've also written my first bike off (hopefully the last). Not only this, but I also managed to have a motorcycle crash at about 110 miles per hour, and stand up once I had stopped tumbling. Yes, you read that right. Thanks to all my protective gear (and probably a shedload of luck - if you believe in such things) I managed to roll down the road, onto the grass and into a wall of old tyres. Stop, and stand up. This is, IMFO, a big F.U. to all of you who say that motorcycling is dangerous. You should read up on the subject first. Anyway. My belowed BMW K1200R is now a mere memory of good times and finally a piece of bent alloys and scraped/broken plastics. I miss you so much.
For about 45 days I lived in limbo; We (mainly Crazy Caz) dealt with the insurance companies, I was pondering the future of my existence, I was wondering what there would be if I didn't go to the next level, was there another level. Could there be a hidden level? But above all, I was pondering what bike to go for after having the BMW K1200R. For you who might not know about the BMW, it's farily heavy, quite long, but it handled like a ballerina despite being overweight. It was also blessed with one of the most powerful engines I've ever ridden. It actually had the torque to do a standing burnout at 1,500 rpms (out of 11,500), idle is 1,000 rpm. It looked aggressive, in fact, I've never seen a bike like it. But now she's gone (and I know it's a faux pas to say "she" about a vehicle, but I really liked this bike).
The dust is just about to settle properly. The insurance claim is 99.5% done, finances reshuffled, and I have a new bike. I didn't have the heart for going for the same make/model. I just couldn't replace my "baby" with another baby. BMW had announced the K1300R and I wasn't very keen on it. It looks a bit off, and I just can't see what super-duper-hero-powers I'd get from an extra 100cc, especially as it's still a heavy beast.
Without stringing you along further, my new bike is a KTM 990 SuperDuke R of 2008 vintage. This was the only bike that provided the following characteristics (jap manufacturers make notes!).
The KTM SuperDuke R weighs under 190kg without fuel. That's basically the weight when you'd run out of fuel. Unlike jap-manufacturers (and other culprits) this weight is with all other fluids, and they do mount up. It's got 130bhp claimed. My bike comes with the dogs-doodah-exhaust made in Tit-anium which should help it even more. It's got high quality WP adjustable suspension front and rear. And the rear damper has got high and low speed compression damping. Sweet. It's also got an adjustable WP steering damper. Wheels are Marchesini. The brakes are Brembo ones, 'nuff said. They're lovely. The frame is stiff as Hef on his birthday with a truckload of bunnies and another one of Viagra. Giggety. And it looks friggin mean. It comes in my favourite colour too, satin black. Simply the best.
The riding position is upright, the seat is so hard that you start dreaming about having a nap on a park bench. Strangely the seat is not annoying.
And, it's got no fairings (or Fairies as by my "expert" in-law), which means that top speed will be reserved for only short stints that really require it, than "defaults" 150mph+ comfortable rides.
Bad points?
Well, "my" dealer is 45 minutes away. It's got 4,000 mile service intervals (Der Panzer had 6,000) and I'll invalidate my warranty if I change oil myself. Go figure. Above all, the low rpm fuelling is absolutely positively totally incredibly fully abysmal. It's as crap as the mayor of the City of Crap, in the valley of Crap, in the county of Crap, in the country of Crap, on the Continent of Crap in the hemisphere of Crap on the planet of Crap in the solarsystem of Crap.
I have never ever experienced a fuelling that has had the urge to throw me off like a rodeo bull when approaching a roundabout, calmly. Something will have to be done abou this. Did I mention the fuelling isn't up to my spec..?
But other than that it's quite a fantastic bike. Not only from the components, but from the engineering too. I changed the clutch cover and got to see the clutch basket. It's filled to the brim. It's the most tightly packed clutch I've ever seen. It's beautiful. Another thing is, I can remove the rear tail unit by; 1) Unlocking the seat, and just yanking it off. 2) Pull a lever, and just simply yank the whole rear body work off. Full access, immediately. Awesome. Same thing at the front. I unscrew two screws at the headlight cowl, and the whole thing pivots forward. Easy access to everything. Perfect.
We'll see how the bike grows on me. Right now, it would be pink fluffy clouds if the fuelling gremlins wouldn't be huffin' about. 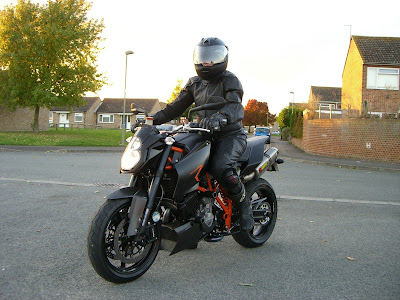 "Funnily" I've already tinkered on the bike. It came loaded with some Carbon fibre bits and bling bits which I have removed. The bike was a bit more expensive than I wanted to spend, so I decided before buying it that I'd get rid of some of the "extras". I've now sacrificed about 700 grams of added weight for the odd £450 returned (Subject to contract. :P). I've also built a prototype "tail tidy" for it getting rid of 450 grams. Next up is, Finnish flags, heated grips (HEY! I'm 35, and I've had 2 BMWs prior to this!), GPS mount, and so forth...

looks properly batman with all those angles...way better than it looked on the website before. me like.