Scoot is on the mend

It's been a long overdue project. We've not really felt for it, but now it's time. I'm talking about our Scooter, nicknamed Scoot De La Scoot, or just Scoot. It's a Gilera Runner 180SP, yes, that's the 2-stroke 21bhp "super" scooter.
Quite a long time ago, we serviced it quite thoroughly, and then we used it for quite a while. Caz used to do the 70 mile round trip to work on it, partially on the motorway. I used it for my commute too. It's so fast that you'll easily overtake cars in the slow lane. It'll cream pretty much any normal car up to 60mph, very much to the boy-racer's annoyance.
Either way, one day on my way to work, the scooter just lost its drive. Engine running but no drive.
It turned out that the crank had broken. Yes. Totally. The crank was off.

It's now time to fix it, we bought a new crank off eBay a long time ago, but now it's time to use it. 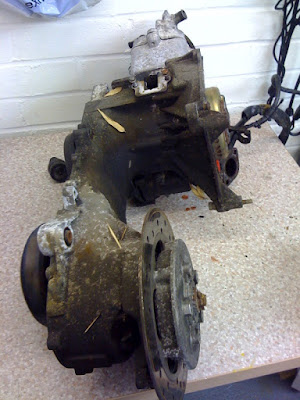 We pulled the engine out tonight. It's an annoying job as there's tons of panels in the way, and a lot of hoses, cables and wires to disconnect.
During the stripping we noticed that we'll have to clean a whole lot of parts, we'll have to paint quite a few of them too. Brake calipers need some TLC, new gaskets, new bolts, new nuts, etc. Loads to do.
When it's fixed we're thinking of running the Scooter for a month or so, and then it's time to sell her on to a new home where someone will actually use her as she's meant to be used. 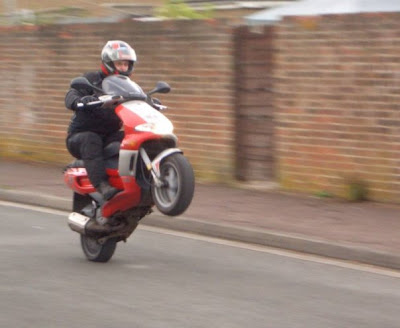 Is Scoot up and running now?

Nope, but progress has been made. Cases are split and most of the difficult parts have been washed. Assembly will start soon. We'll still need to wash a lot of small bits and pieces and order some new stuff, such as gaskets.

Nice to see there's some progress. But gaskets on a scooter? Do you believe in that? I thought they were only used in Hollywood land movies and that real men didn't use such a soft material. ;-)

I believe in what the manual says.