This blog post starts waaaaay back in time, sometime in my childhood. After learning to ride bicycles. My friend had a, what could be considered, a chopper bike. It was nothing more than his normal bike, that his stepdad had fixed up a bit. Removed the luggage rack, shortened the mudguards, but above all, installed the long forks from an adult bike. Then painted it in metallic blue. Gorgeous. And amongst us other kids, his bike was awesome.
Let's add to that, the fact that I had friends who all had garages and/or access to welders, grinders, and other tools. They had home-made stuff, and customised stuff. I never had that. I wanted to cut, bend, weld, etc, but I never really had the equipment, nor did I have the encouragement. That last part is quite important. If you never get encouraged to do things you can't do, you'll end up living in a life that's surrounded by a wall that tells you that inside the wall is stuff you can do, and outside the wall, there's stuff that you can't do, and that you shouldn't really aspire to do the things you're clearly not capable of doing. Welding is one such thing that I was told is difficult and that you just can't do.
Well screw that! Here's a fact I've learned, and the sooner you learn it too, the better the world will become.


The skills you don't master right now, are only hard work, studies and lots of practise away. Just learn how to do it. That's all. Really. There's no magic in it. Tedious practise, studying, investigating, and so forth. It can be done, but you're the one going to have to do it.
Back on track... Chopper bike.
As you can imagine from the aforementioned setting, I've always wanted to build a bicycle. I never really knew how to do it, and I never knew where to start. I thought I had to have calculations, drawings, engineering degrees, precision jigs, and so forth. Thanks to Brad and Kat at Atomic Zombie, I've realised, that I don't need all that. What I need is scrap bikes, a bit of hard work, unconventional engineering ideas and a bit of "just do it"-attitude.
So, there I was. I was given a complete girls cheap mountain bike - perfect. I paid £5 each for two car wheels, and a ridiculous £10 for a kids 20" mountain bike, fully suspended, I might add, but it doesn't add anything. With that, a welder, some other tools, I was ready. 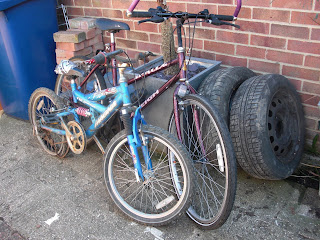 From there on, I had to order some tubing, I got some 3/4" 18swg tubing along with some 1 1/4" 18swg (that's 1.2mm wall thickness for the civlised world).
Well, to cut a long, sweaty, bloody, painful, burning-flesh-smelling-story short, I spent about two months in the garage. The above picture is taken on 3rd June 2010, and I fitted the new brake cable on the 29th July 2010.

The result is this; 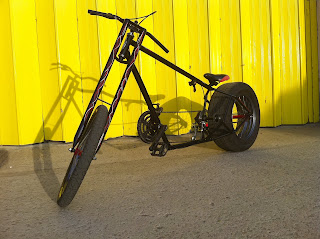 I've learnt a lot, and I've had a lot of fun. One mistake I did was put a deadline on the project. They always take more time than you expect, but this took a bit more as I had hoped to build a trailer for the Chopper too. This deadline was because I wanted Mark Willhans of Pinstriping.se to do the gorgeous pinstripes on the bike. He was kind enough to do it, but I must admit I felt quite stressed during the last week or so. I think the quality dropped a bit too.
When I ride the bike people stare, stop and ask, give thumbs up, ask for test rides and so forth. It's actually quite hilarious. I love riding it.
I'm considering the bike done, but as time passes I'll do some improvements to it and it will evolve a bit. I need other bars for it, and another wider seat. Also the aforementioned trailer will be built at some point.
If you're interested, there's some 240+ images of the whole project in my Picasa album "Chopper Cycle Project".
So, all in all, one more thing ticked off the list, and a funny object to be a bit proud of. Finally a thought for all of you; Just do it - you can, all it takes is hard work.
Posted by J at 00:02

I'm glad I became a part of this project. The craftmanship of your metalwork is excellent. / Mark

I'm glad you did too. Thanks! :) You took a home built chopper and made it into a custom chopper. :)

Really enjoyed reading this and poring over the Picasa gallery. There's some great work (and recycling) gone into this bike.

Glad you enjoyed it David. It's comments like yours that makes those moments when I was dripping of sweat, burning myself on hot welds, cursing that I can't get to the spot to weld, etc, that just wither away to nothing. :)