It's so long ago since I wrote about Scoot that I'm quite ashamed of it. The things that has happened with Scoot since 19th Feb 2010 is quite a lot. Not only did we (I) take the whole engine apart, but we spent a long time washing it and making sure every bit that was going back into the engine was up to scratch. We've bought tons of new bolts, a bearing, new starter gear, new brake pads, new fluids, etc, etc, etc.
I had to keep reminding myself that this isn't a restoration, that this is a repair. In my head, I wanted to shot blast every piece of the engine that didn't look brand new. I wanted to paint, sand, polish, powder coat, etc. But all the time, I had to remind myself that this Gilera Runner 180SP is a machine that's past its visual best, especially if you factor in how much it's worth. You can't spend 20% of the scooters sale price on refurbishing the wheels for example. They are, as they stand, perfectly round, perfectly acceptable to take a rubber tyre and they have good bearings and they work as per specification. Still, it rips my heart that they are not pristine. Really.
On the inside of the engine, however, things should be absolutely tickety-boo. I'd like to think that anything that has to do with the engine is up to scratch, up to Haynes Manual standard. I'd like to think that the whole mechanical aspect of the scooter is sound.
I'll give you an example. When we (I) removed the rear brake disk, some of the bolts were rounded off (allen head). I used my Dremel to shape the heads so I got some pliers on them so I could turn them. Now, out of the 6 (if my memory serves) maybe 3 of the bolts were "damaged" in this way. In my book totally useless. I could have reused the 3 that were "OK". But I didn't. As I can't guarantee that the next time they need to come out, I've chosen to replace all of them. Cost is not an issue as the cost is almost negligible, but it's the principle. By the same principle there's been a lot of bolt replacements, most of them genuine Gilera spares, some of them improved stainless steel ones (in the brake calliper, for example).
Another example is the exhaust. I spent a few evenings TIG welding it to fix the rust holes that had developed over time. A few parts of the exhaust are quite exposed to road grit, dirt, stones and above all salt. The exhaust had rusted through here, so I cut things off, steel brushed, dremelled, brushed, etc. I formed a piece over it all, then carefully TIG welded the whole thing up, and all the other bits and pieces I had to remove to get to the rust. I also welded on new threaded nipples that hold the stainless heat shield onto the exhaust. When I was done with the welding I painted the exhaust with Zinc paint to prevent further rust-rot. This should make sure that the exhaust will have a reasonable lifespan after Scoot has left our care.
We have since the rebuild ran the Scooter for, maybe 500 miles. We've had a few things that didn't work - a hose kept coming loose, for example. I've had to thread lock a bolt as it was undoing itself. We've had to replace the new battery as it died on us after we cranked the engine too much due to the loose hose. The floater bowl was leaking... and probably something else too. Either way, all the teething problems have been minor, and they've been rectified.
Which brings me to the next point. Scoot de la Scoot is now, pretty much, ready to be sold. I'm going to wash her up, give her a coat of wax and then we're going to take pictures of her and all the accessories and parts we're including in the deal.
When we finished the repairs we had her MOT'd and Taxed, so she'll come with some 10 months remaining on both of those.
If I were to be the next owner, and I'd like to have her looking good (i.e not a workhorse commuter scooter), I'd probably take the wheels off and refurbish them, probably powder coat them. I'd also paint the forks as they've got a few specs of rust on them. I might also fork out on new fork legs as they're a bit worn and pitted. And a new rear shock, whilst at it. If my budget would stretch I'd also put on a nice expansion chamber - the 180cc two-smoke engine kind of deserves that.
Other that, she's ready to rock, ready to move on. 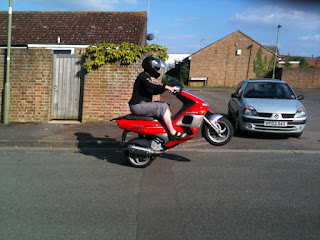 Gilera scooters are just great. It's a really good machine that is still affordable.